The Stroh Road Bridge in Attica, NY is set to reopen in November 2018 after being closed for reconstruction since May.

CPL teamed with Genesee County and L.C. Whitford to replace the decaying bridge that was built in the early 1900s.

An important thoroughfare in the Village of Attica, the bridge has experienced much wear and tear over its life. In the 1970s, repairs were made to the bridge by filling in the open steel deck with concrete and applying an asphalt wearing surface. The surface of the existing stacked stone abutments was also treated with a concrete overlay. Due to its advanced age, salt used in the winter to control surface freezing, and continued use, portions of the steel superstructure were severely corroded. For the last 10 years, there have been use restrictions along the shoulders as well as weight restrictions posted for the bridge.

“The Stroh Road bridge is a key connector between Route 20 and Route 98, and is close to a dairy farm and sand and gravel quarry,” said Tim Hens, Genesee County Highway Superintendent. “The restrictions were impacting our local businesses.With the reconstruction, the bridge is back to a full load posting,” he said.

“The new bridge is a durable structure with a long service life,” said Greg Neddo, CPL Structural Engineer on the project. “The maintenance for this type of structure is minimal, which helps lower the overall cost, allowing the county to spend funds elsewhere in the community,” he said. 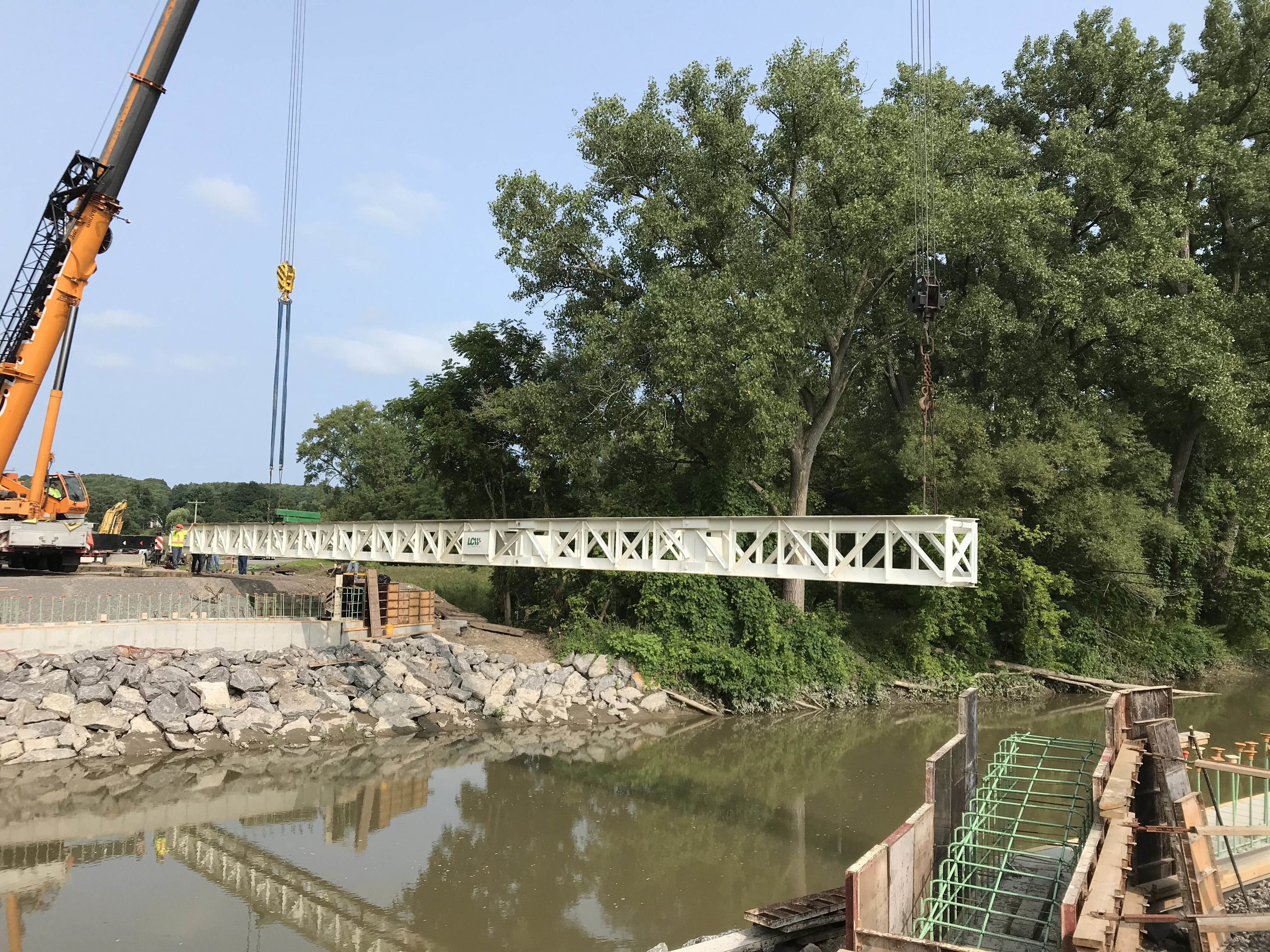 The pre-cast and prestressed concrete beams used on this project are common on similar municipally-funded projects and were cast at L.C. Whitford’s fabrication plant located in Wellsville NY, about 60 miles south of the project.

“We are one of three concrete beam suppliers in New York State,” said Paul Sisco, Project Manager at L.C. Whitford. Even more unique, L.C. Whitford was able to provide the extended span length needed for the bridge.

“The average length of a concrete beam for a bridge like this is between 50 and 60 feet. These beams are 107 feet long,” Sisco said. This pushes the limit for what this type of beam design is capable of handling.

Setting the beams in place called for precise and significant work.

“We used two cranes and a slider beam verses one pick with a single crane,” said Neddo.

This system allowed the use of smaller cranes to set the beams. These smaller cranes couldn’t provide the lifting capacity or the reach (to the center of the span) that a larger single crane could provide. The slider beam allows the contractor to literally slide the concrete beams across the span allowing the two smaller cranes to simultaneously lift the beams into place.

Once the beams were set and grouted in place, the composite concrete deck was placed on top of the beams, offering a solid, durable and economical deck.

Since the existing soils at the Tonawanda Creek Basin provided poor bearing capacity and were prone to scour and erosion, the bridge designers and contractor faced additional hurdles throughout the process.

“While excavating to install the new abutment, we ran into old abutment materials from the bridge that existed over 100 years ago and prior to the bridge that was recently in service,” said Sisco. CPL directed the Contractor to over-excavate the areas around the proposed abutment to remove the old substructure that was previously abandoned.

Because the bearing capacity of the soil was poor, the bridge abutments had to be constructed on steel friction piles that were driven into the ground more than 60 feet deep to lock the structure into the soil. A layer of heavy stone fill was placed along the stream banks to prevent scour and erosion during peak storm flows. A system of temporary steel sheet piles and large sand bags were used as “cofferdams” during the abutment construction to hold back the water and keep the construction zone dry. 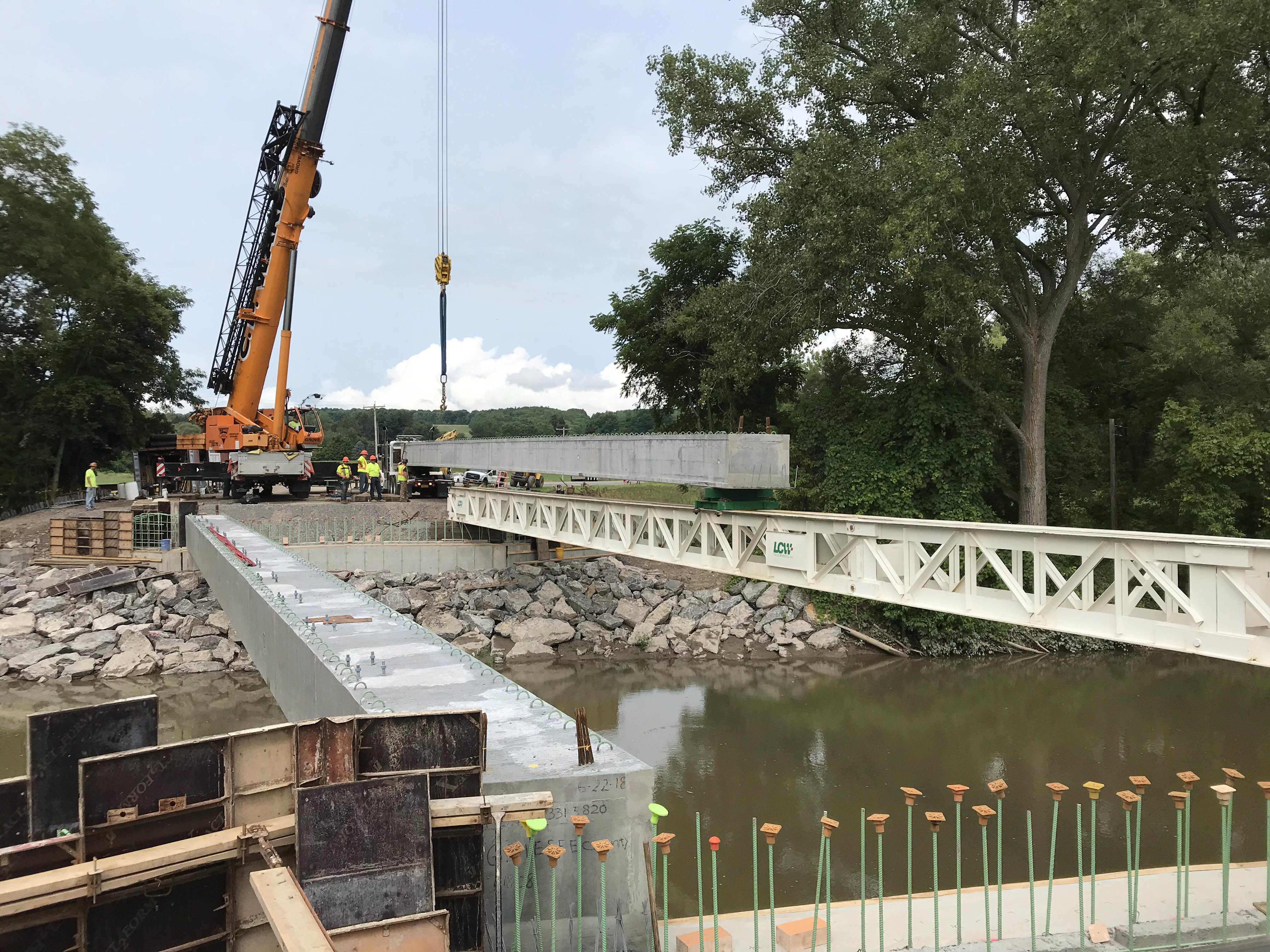 Genesee County originally submitted the project for reconstruction under a Locally Administered Federal Aid (LAFA) program, but when the project was not chosen for funding under this program, the County moved forward with the project by financing the $1.5 million cost directly through the County’s infrastructure reserve fund. This fund was partially made possible through its recent sale of the Genesee County nursing home.

The local County funding of this project ultimately led to a streamlined process separate from the federal process, which followed the use of NYSDOT specifications, and the construction of a bridge that meets the state’s standards while avoiding much of the regulations and approvals that would have been required if federal funds were utilized. Ultimately this project might have cost as much as $2.8 million dollars ($1.3 million more) if the County had relied on Federal funding.

“We were able to be more effective and deliver twice the work at half the cost,” added Hens.

“The planning and design schedule and process for this project was dramatically compressed because of the use of local funds,” said David Askinazi, Principal Associate and Project Manager for CPL.

“Genesee County takes a straight-forward, streamlined approach to the development of their projects,” he said. “At CPL, we really value, appreciate and enjoy working closely with Tim and his team at the County to provide cost effective solutions to their infrastructure needs.”