When you think of pets, do you think of cats, dogs and goldfish? Some of our CPL team members think outside the fur when it comes to Fido. Let’s meet some of the exotic CPL critters.

Eller credits her interest in many animals to her childhood, when she would shoo snakes out of the shed before her father found them with the lawn mower. Her mother worked at a veterinarian’s office and would frequently teach Eller about animals. A pet lover herself, Eller’s mother would bring home painted turtles, various lizards, and a few bearded dragons over the years.

But, Eller wasn’t allowed to have any snakes until she moved out. Now, Eller has had snakes for 15 years, in addition to her reptile collection.

“At one point, when living in Maryland, I had 60 snakes and two bearded dragons,” she said. 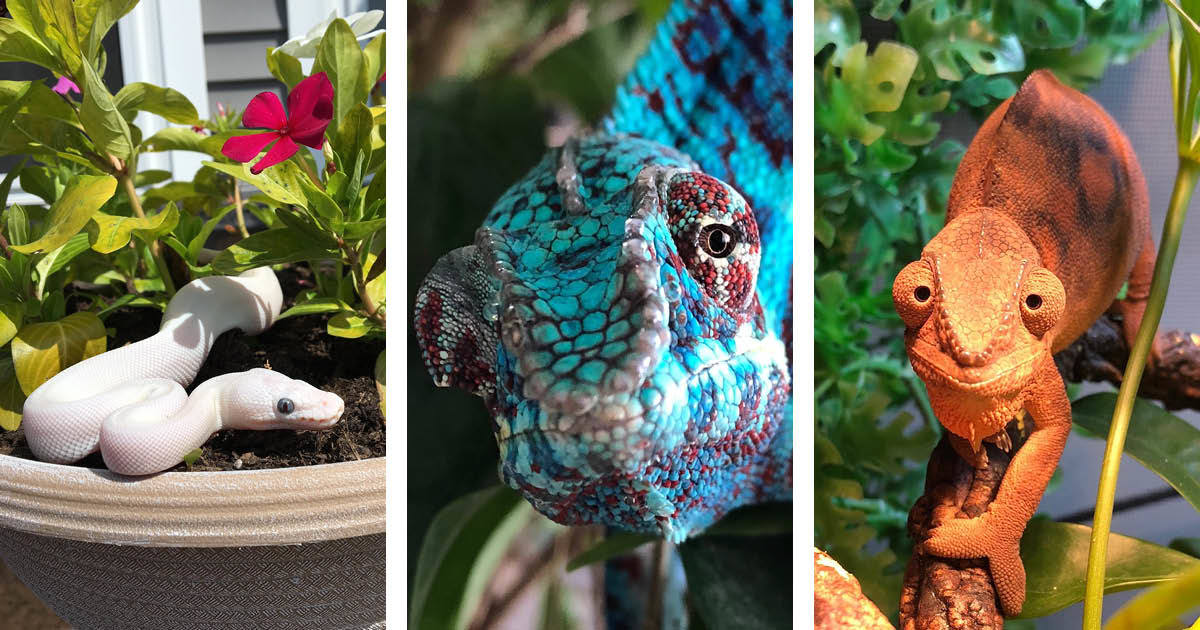 Reptile lovers typically turn their hobby into a business by breeding and selling their animals. Eller has successfully bred snakes and crested geckos already. Her newest endeavor is breeding veiled and panther chameleons. She has 100 eggs in the incubator and a hope that many of them will hatch.

Contrary to popular belief, chameleons don’t actually take on the colors of their surroundings, but they do “fire up” specific colors based on their mood.

“In the future, I hope to specialize in breeding clowns and blue-eyed Lucys,” she said, which are two morphs of ball pythons. “And, I hope to become well known for breeding healthy and beautiful chameleons,” she added.

For pets, Eller said she is hoping to get a blue-tongued skink and leaf-tail gecko in the future.

Brittany Nowicki, interior design team member, has what she describes as “cat-dog-slinkys” as her interesting pets. Willow, Coconut, and Olive are her three ferrets, ranging in ages from 3.5 to 4.5.

Nowicki researched the type of pets she could have in college with strict adoption rules and landed on ferrets.

“I wanted a cuddly creature in college,” she said, “And I fell in love with ferrets at the local pet shop.”

Nowicki describes the animals to be affectionate, extremely curious and smart.

“They never fail to make me laugh and brighten my day. They’re easily trained, use a litter box, and while they sleep in a cage (a two-story enclosure with tons of ramps and hammocks to sleep in), they roam the house whenever I’m home,” she said. 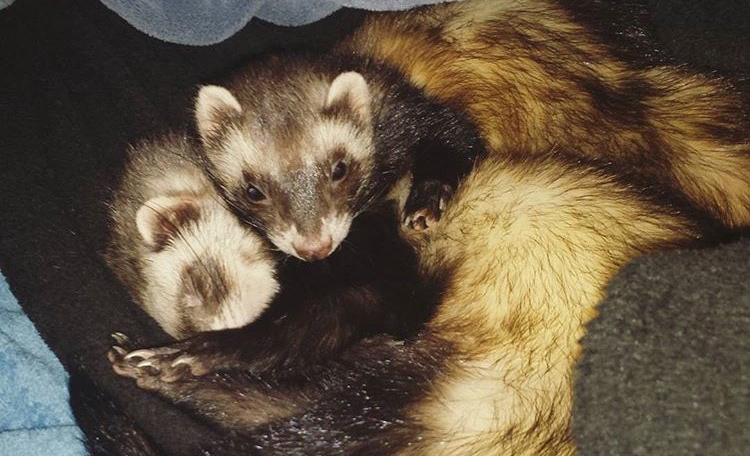 Nowicki enjoys taking them for walks in warm weather in their harnesses. When they’re not outside, they love to play with their squeaker toys, play in tubes, and wag their tails. Ferrets also make a noise called a dook when they get excited or playful.

“It almost sounds like a little turkey gobble, but a lot cuter,” she said.

Jason Benza, architectural team member, has been practicing falconry for more than 10 years, and currently owns two hawks: brother, Zues and sister, Hara. The birds live in a 12’ cube inspected and permitted enclosure where they can rest safely.

Benza first became interested in falconry when he took an ornithology class as a biology elective in college. Although he first signed up for an easy A, after the first field trip, Benza was hooked.

“I thought it was the coolest thing in the world,” he said.

Benza immediately started working toward his falconry license, normally a 12-month process including a test, certifications, and a sponsor, as well as securing both a state and a federal permit. Enamored by the hobby, Benza completed the steps in just five months. Since then, he has progressed from an apprentice to a general, with a master license in the very near future.

Before joining the CPL team, Benza worked as a professional falconer in New York City and New Jersey, chiefly focusing on bird abatement at airports and an Air Force base.

“It’s important to keep the pest birds away from runways where aircrafts are in use,” said Benza. “The falcons scare away pest birds and reduce safety issues for aircrafts.” 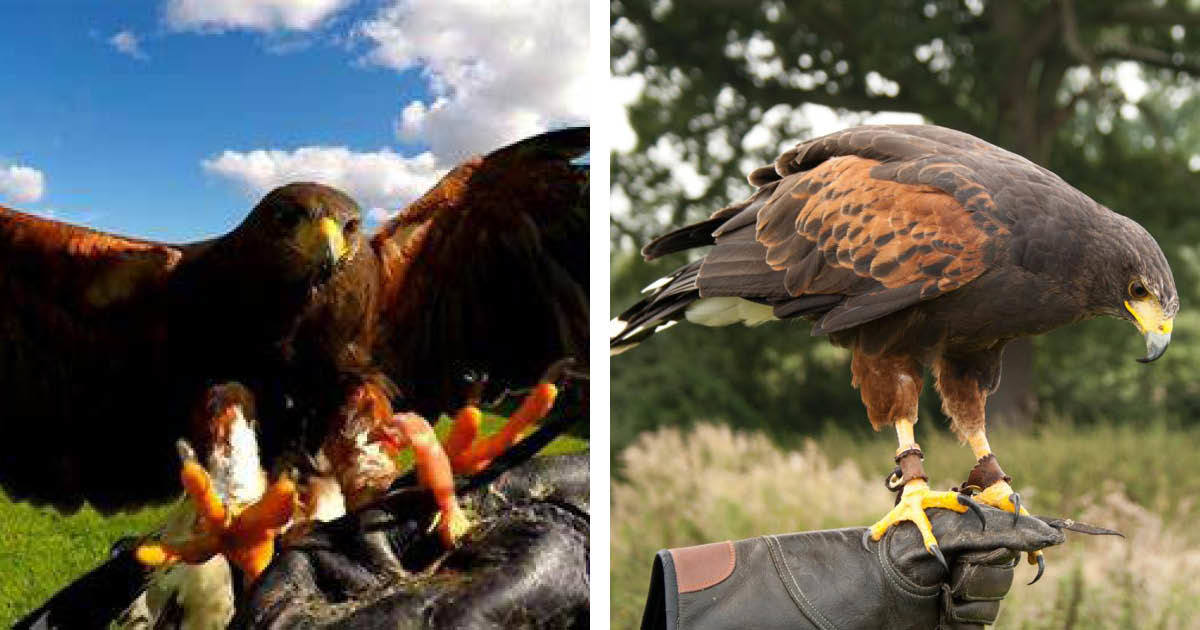 Aside from important safety jobs like these, falconers also have a positive impact on the breeding and care of predator birds.

Once a critically endangered species due to DDT pesticides and lead poisoning, peregrine falcons are now up to a healthy population thanks to falconers. “At one time, there were 350 breeding pairs in the Eastern US (40-50 nest sites in NY). By 1965, ALL were gone because of DDT,” according to the NYS DEC website.

“Rochester played an important role in the reintroduction of Peregrine Falcons to eastern North America after the species was nearly wiped out in the 1970s from the use of DDT,” explained the website. “The Kodak Tower birds were brought in by the peregrine fund in 1995 and, to date, Kodak has had 67 fledglings come from it.”

Although Benza is not breeding any birds right now, he does still use them for good. When not hunting, Benza’s hawks accompany him to educational events. He is currently involved in a program to introduce inner-city youth to forests and local animals.

Benza trains his hawks with a process called Operant Conditioning, where he builds trust with the bird on a tethering system before it’s safe to let the bird fly on its own.

“After they feel comfortable, you start increasing the distance away from where they are perched, and next thing you know, you’re outside in nature just going for a hike with a really cool hunting partner and companion that follows you,” Benza explained. “It makes me feel like a proud father!”

There are several ways to signal a hawk, including: summoning the bird to your glove, telling the bird to fly past you, alerting to find prey, and sending the bird high into the air. These calls are either human-voice whistles or arm movements.

Benza has had eight hawks and one falcon in his time as a falconer. In the future, Benza dreams of having a Golden Eagle, which he can own once reaching the master level in his licensing.

“For more information on falconry, call me!” he said. 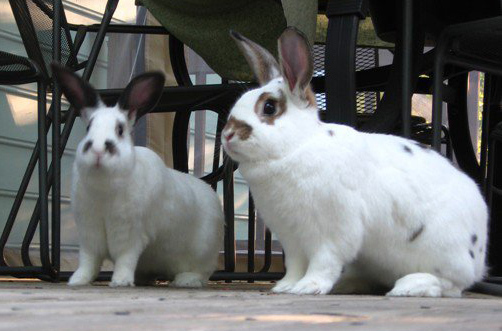 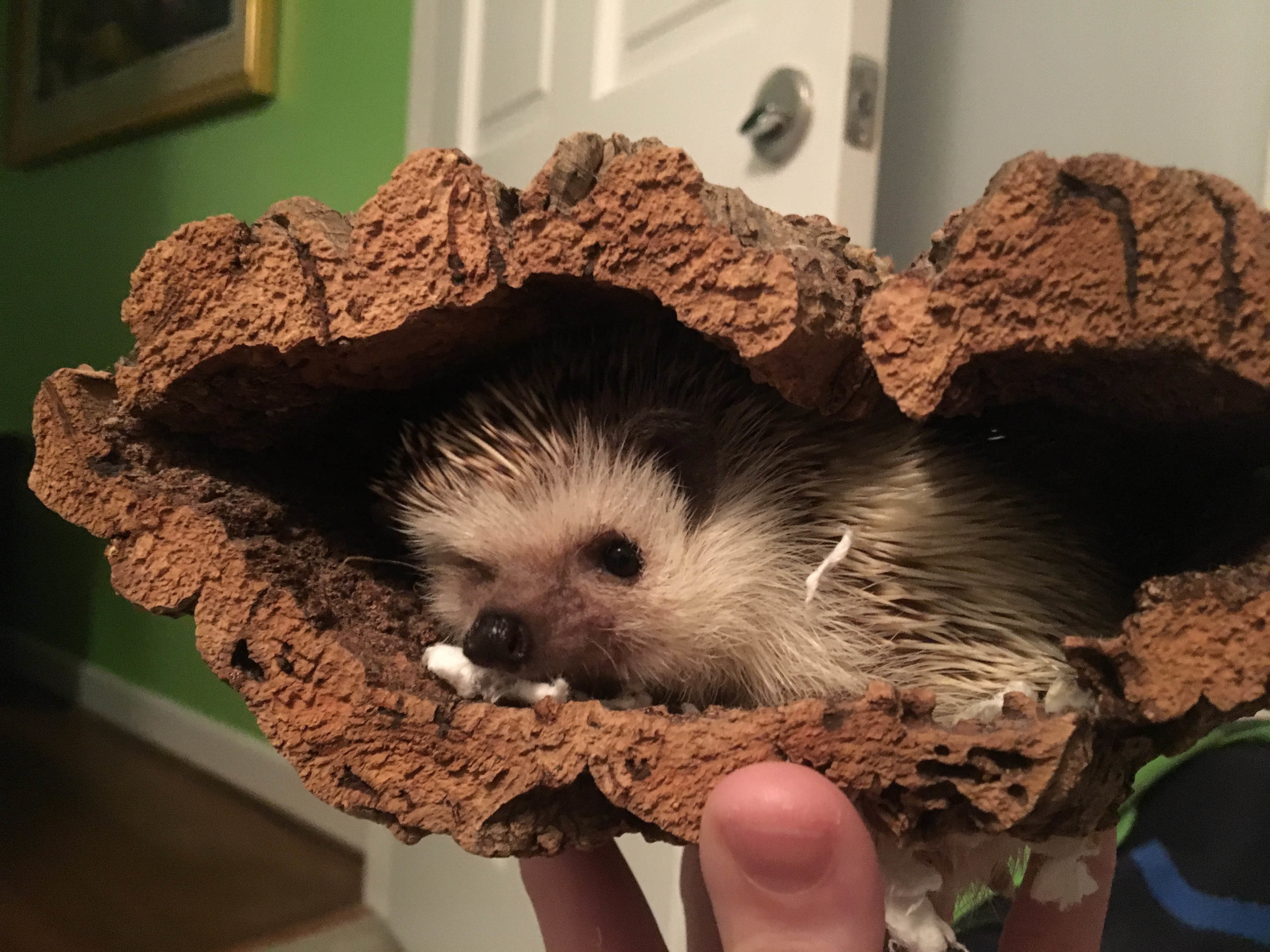 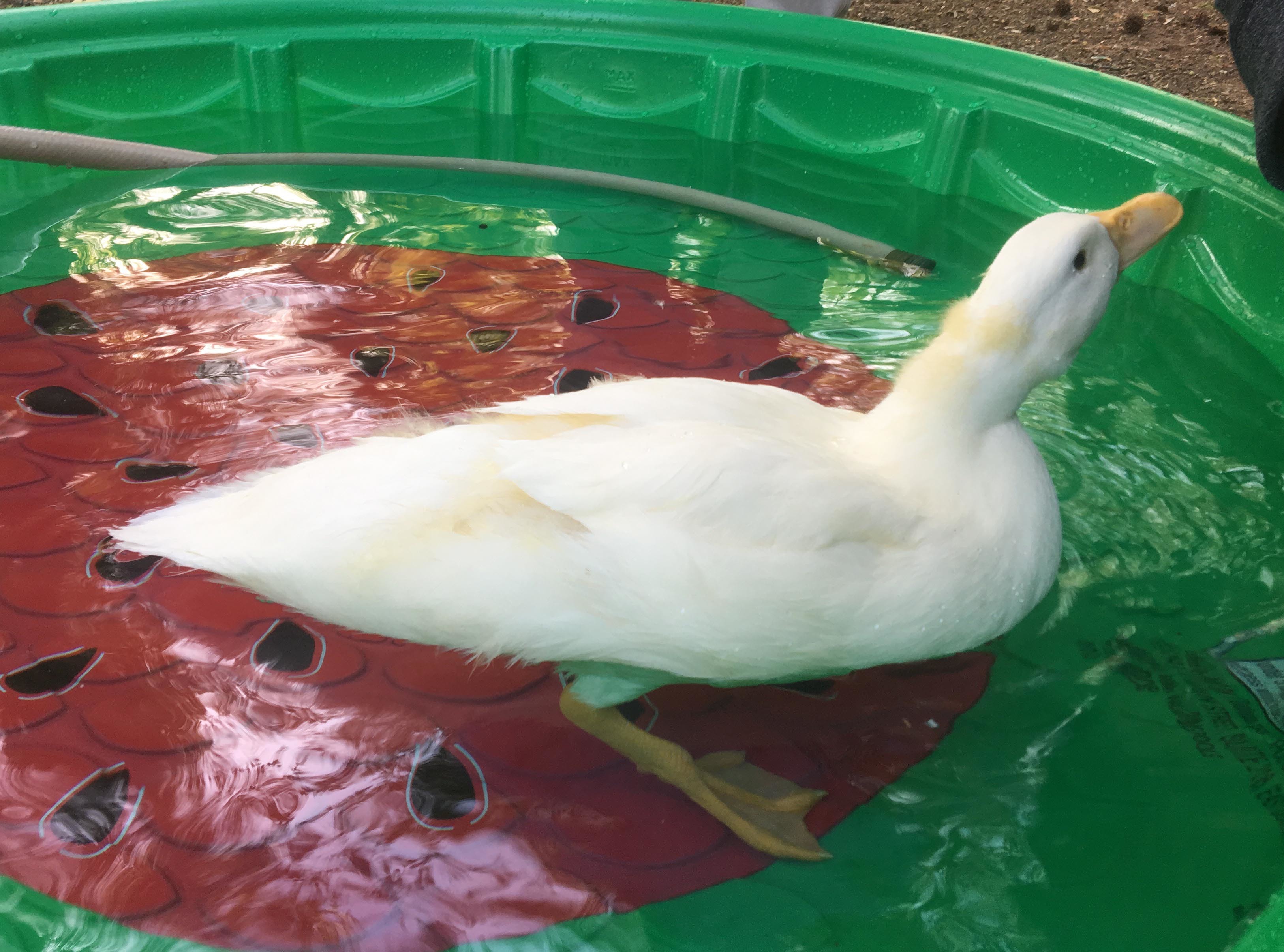 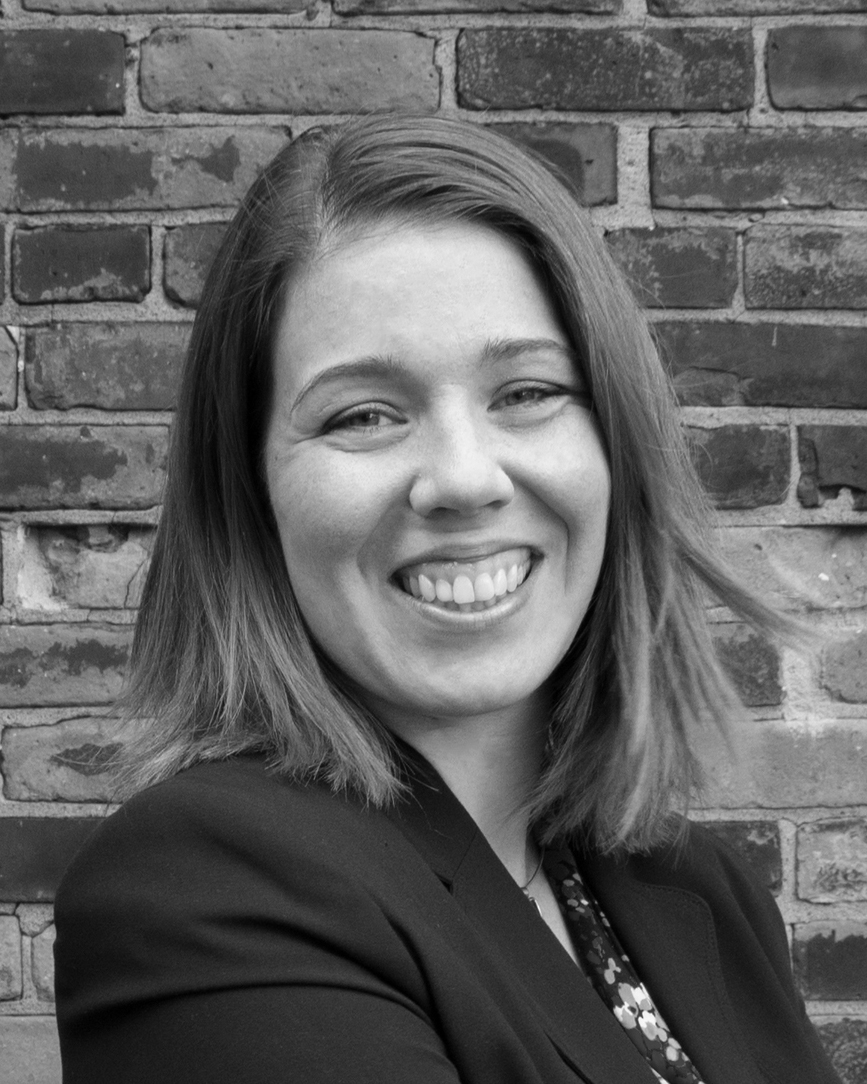 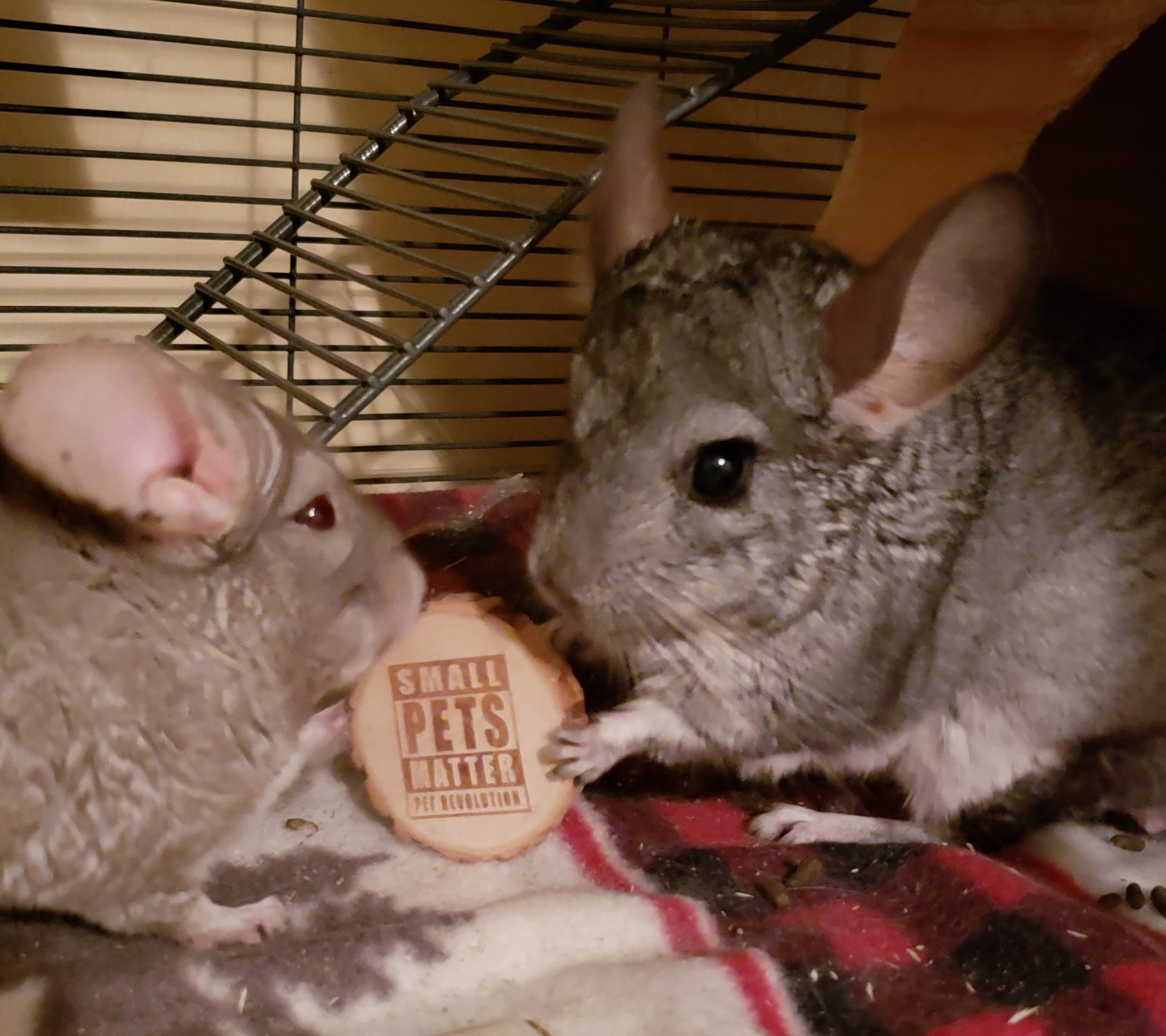